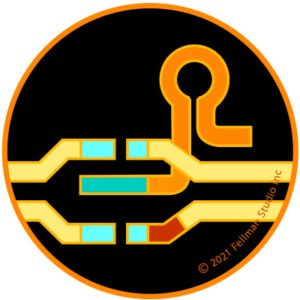 You’ve seen the word and probably heard there’s a Noble Prize involved, but what is CRISPR?

It’s Nature at its cleverest. CRISPR is a mechanism in bacteria — a technique that the tiny, single-celled organisms evolved to protect themselves from viruses. A microbiologist discovered the mechanism, and genome engineers have turned it into a gene-editing tool.

Who named it? Francis Mojica is the molecular biologist who discovered the short repetitive sequences and gave them the marbles-in-your-mouth acronym CRISPR. The name makes sense, though. Some sequences cluster together and repeat at somewhat regular intervals throughout a genome.

They also have a curious kind of “spelling.” The short sequences are palindromes; they read the same backward and forwards. Mojica suspected the repeats must have important functions. But what exactly? After years of research, in 2005, he published his discovery:

Mojica anticipated his research would spark biotech innovations, and that’s the contribution genome engineers Jennifer Doudna and Emmanuelle Charpentier made. They reprogrammed the CRISPR mechanism in bacteria to use as a gene-editing tool.

CRISPR and the Nobel Prize! Jennifer and Emmanuelle shared the 2020 Noble Prize in Chemistry for their “co-development of a method for genome editing.” You can listen to Jennifer’s Nobel Lecture, “The Chemistry of CRISPR: Editing the Code of Life,” and read an explanation of the “genetic scissors” on the Nobel website.

What does CRISPR look like? The black and white photos (below) are near-atomic resolution snapshots. The fuzzy image of tiny gray shapes on the left shows thousands of CRISPR molecules seen through a cryo-electron microscope.

The grid of blobs on the right shows hundreds of thousands of particles combined into 2D shapes. To see a 3D model based on the snapshot, watch a full-color animation that helps scientists understand the step-by-step process that builds the structure of CRISPR.

Scientists also use diagrams to show the critical functions in simple diagrams, such as Marius Walter’s elegant example below. His drawing and my simplified version of it (on top of this page) direct us to the key elements of the CRISPR Cas9 editing system.

See the green shapes labeled “Target” in the diagram? The guide RNA (gRNA) is programmed to find the Target on a specific sequence of double-stranded DNA (dsDNA) and cut at that precise location (cleavage). Watch the system in action in this 3D animation. 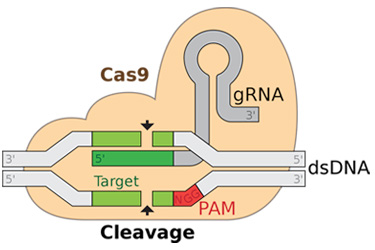 The system works in all living organisms. Researchers can edit any physical location of a gene or a specific sequence on a chromosome. And delete or add a short sequence of new code.  When you read about scripting, writing, re-coding, or programming DNA and RNA, they describe gene editing, and scientists might be using CRISPR.

CRISPR is more than cool tech, it’s saving lives with treatments for cancer and inherited diseases. Genome engineering tools modifying the CRISPR system are becoming more precise, cheaper, easier to use — and just in time. CRISPR is one of the essential tools to combat climate change. Genome engineers are racing to script life for a healthy planet as the crisis accelerates.

Curious to know what’s next? Watch my interview (below) with Dr. Kevin Davies, one of the invited speakers at the Genome Writers Guild 2021 Conference. He says CRISPR is just the beginning — one stage in the evolution of genome technology with more exciting developments leading to future Nobel Prizes.

Kevin is the author of “Editing Humanity: the CRISPR Revolution and the New Era of Genome Engineering.” You can purchase Kevin’s book from Amazon.

Kit Leffler at the Center for Genome Engineering produced the video for the Genome Writers Guild (GWG) 2021 Conference. I’m one of the founding members of the GWG and develop design and graphics for our annual conferences. The Guild is a genome engineering society building a better future for humanity through genome engineering and public education. Check out the GWG events underway for 2022.