What is a gene? 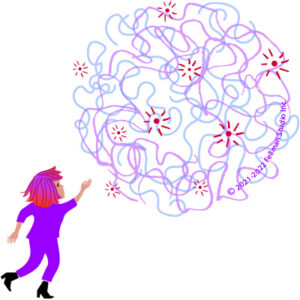 What is a gene?

Scientists haven’t always agreed on what a gene is. The definition has changed as sequencing technology has improved. In fact, since the launch of the Human Genome Project over twenty years ago, scientists are still identifying genes and finding new ones.

We don’t know exactly how many we have. It turns out that finding, counting, and understanding a gene’s function expands the definition — for practical applications and conceptual knowledge.

The original draft of the Human Reference Genome was assembled from short-read sequencing technology. The early tech couldn’t map regions considered “dark,” such as large duplications and long repetitive sequences.

New, long-reading machines can decode the dark zones and discover new genes. The tech is also building a Pangenome to “address the racial and ethnic biases in genomic resources, most specifically in the human reference genome.” Learn more on the Pangenome website and my ThinkBit article.

How many genes? Most sources tasked with gene counting identify only protein-coding genes on our chromosomes. Many genes don’t code for protein, yet these non-coding genes provide important functions. Until long-read tech becomes the standard, new genes and what they do await discovery. For now, (fall 2021), this is the latest count of chromosomal genes:

What about the number of genes in our mitochondria (mtDNA)? Scientists agree that mtDNA has 37 genes and they pretty much understand the essential functions:

What is a gene? Old-time textbook definitions say a gene if it codes for protein. But some genes don’t. Older references also say a gene is a linear sequence of base pairs that starts in one place and continues uninterrupted to end at another site.

Genes have parts, and they sit far away from each other on the long strands of DNA. The strands bend and turn to bring the parts closer together to allow a gene to activate. You know it as gene expression and regulation.

A new definition: A gene is a concept: not just one simple thing but a collection of interrelated functions that bind us together.

Dr. Thomas Gingeras, Principal Investigator, NIH ENCODE Project favors a conceptual definition rather than a concrete one. It’s a whimsical perspective, but it brings us closer to more profound knowledge. The adjusted perspective teases a rigid understanding of biology, provoking fresh questions for new investigations.

Watch Dr. Gingeras’s lecture “Gene is a Concept” about the evolving definition as gene functions are better understood (start at 11:01 min).

The image at the top is an imaginary drawing of a small person reaching for the concept of a gene. Sitting on tangled strands of DNA, dynamic and expressive, sparking a variety of functions — genes seem to have a whimsical nature, don’t they?