We are a mosaic of genomes 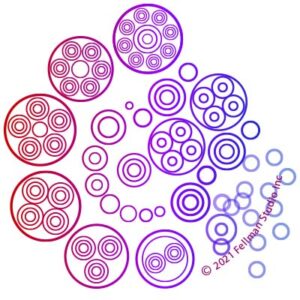 We are a mosaic of genomes

Humans are good at recognizing patterns. We find pleasure in sorting complexity in cross-word, logic, and jigsaw puzzles. Artists are intrigued by this ability, and some take pattern-making as their muse. (See my grid-style paper mosaics).

Others are known for glass works of art, like the mosaic tiles designed for the New York City Subway. Especially intriguing are twelve portraits at the 86th Street Subway Station by Chuck Close.

Large-scale, mosaic-style portraiture is Chuck Close’s trademark, and it’s mesmerizing. “Walk to within arm’s length of one of his portraits, and the subject will dissolve into an abstract blur of individual squares.” (Quote source: Mozaico. Image source: Artsy).

A patchwork of small pieces making a unified composition is a definition of mosaic art that can also apply to human biology. Our body has trillions of cells that make various tissues. Each cell has small changes to its genetic sequence, giving us slightly different versions of our DNA. Like an original composition for a work of art, we are a mosaic of genomes.

Did you know? Your one genome is really made up of two genomes. You get 23 chromosomes from Mom (half her genome) and 23 from Dad (half his) for a complete set of 46 chromosomes. Now add mitochondrial DNA from your mother, and you have your one-of-a-kind genome.

There are other mosaic-like patterns in human biology. We can “carry” more than one genome — making us a mosaic of slightly different genomes. Some examples:

Biome. All organisms have a genome, even simple, single-cell creatures like bacteria. You have a microbiome made of trillions of bacteria living on your skin, in your mouth, gut, and intestines. Each one has a genome.

Baby genome. Genetic tests can identify and analyze a baby’s genome while still inside the mother’s womb. So Mom carries, temporarily, two genomes.

Reference genome. The original and current Human Reference Genome (HRG) is a mosaic of genomes assembled from DNA from just a few volunteers. So you guessed, the HRG has a major diversity problem impeding advances.

A new reference, the Pangenome, is being built to reflect a broad spectrum of human diversity and genetic variation. Scientists are updating the HRG with sequences from hundreds of people from all over the world.

Isn’t this fascinating stuff about our magnificent genomes? It gets more intriguing with cell mosaicism — individual cells that have different genomes. In fact, within clusters of cells, we may have, as a normal state of being, thousands of pre-cancerous mutations.

Did you say cancer? Even though most mutations are harmless, many cells in your tissues carry pre-cancer mutations. Your body consists of cells that make a variety of tissues, and the DNA in every tissue has mutations that modify the genetic sequence.

Some of the earliest changes can accumulate more mutations, and eventually, some could become cancer. A study of 29 different types of tissues revealed the extent of the complex patterns in our genomes:

“We now appreciate that we are mosaics. A substantial number of cells in our body already carry cancer mutations. These are the seeds of cancer.” — Inigo Martincorena, geneticist, Wellcome Sanger Institute

With the ability to identify mosaicism and detect the early stages of cancer, scientists and physicians are asking:
• Which cells will develop tumors and which will stay healthy?
• When do we take action with cancer-fighting treatments?
• Should we re-define what is normal?

The transition from healthy > pre-cancer > take-action cancer is fuzzy, and the research challenges current medical standards and procedures. Dr. Tomasetti at Johns Hopkins Medicine considers “this messy situation is the new normal. The challenge is to figure out up to what point we call something normal.”

Read more about the study in the open-access article in Nature Research Journal titled, “The human body is a mosaic of different genomes.”

The image at the top is a portion of an illustration depicting the evolution of unicellularity to multicellular. I created the image for a UCSF scientific conference on evolution and cancer.