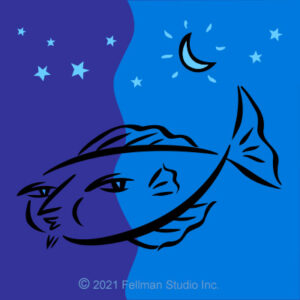 “Waking Sleeping Beauty” is an evolutionary tale about a little fish with jumping genes. Let me introduce these wacky characters that play a role in all of our genome stories.

The rascals are chunks of DNA in a genome that can jump from one position to another. Scientists prefer the term “transposon,” I call them rascals because when they jump, they change the genetic sequence, which can cause mutations.

Transposons make up about half of the human genome. Are we in trouble? No! Their mobile behavior is long gone. Evolution put pressure on them, over millions of years, to stop jumping. They sit quietly in our genomes today, remaining inactive, silent, and asleep.

“There are some retrotransposons (LINE1s) still active in humans. But no DNA transposons as far as we know, although this is controversial.”
— Dr. David Largaespada’s comment to clarify my script for the “Waking Sleeping Beauty” video. Scroll down the page to watch the 4-minute video.

Scientists are fascinated by Nature’s biological mechanisms. A transposon’s mobile ability is especially intriguing. Some wondered, what if we could “wake up” a transposon and tame it? Could we use its behavior as a tool for gene discovery?

Imagine you want to introduce new genes into a genome. It’s a challenging endeavor because DNA is nano-small and scrunched into the nucleus of our cells. Somehow, the gene has to go through the cell membrane, into the nucleus, and insert itself amongst the billions of base pairs. Could they design a system that does all that?

It’s what genome engineers have been working on for decades; basic research to understand fundamental mechanisms and then develop genetic tools for translational and clinical applications. CRISPR is one of the latest; the Sleeping Beauty Transposon System is one of the earliest.

The 4-minute video, “Waking Sleeping Beauty” is an evolutionary tale not only about Nature’s deep passage of time but also about the intrepid scientists at the University of Minnesota who developed the transposon system. The video (below) shows a glimpse of the many-year process of scientific inquiry.

Have you visited a genomics lab or met the Principal Investigators in charge of their lab’s scientific research and clinical trials? Take a minute to get to know the geneticists in the “Waking Sleeping Beauty” video. Go to their lab websites for descriptions of current research and links to published papers:

Drs. Perry Hackett, Scott McIvor, and David Largaespada are Principal Investigators in the Genetics, Cell Biology, and Development department at the University of Minnesota. Dr. Steve Ekker is Professor of Biochemistry and Molecular Biology and Dean of Mayo Clinic Graduate School of Biomedical Sciences at the Mayo Clinic.

The research they began in 1997 in the Hackett Lab has led to real-world applications. From waking an ancient transposon to reconstructing it as an innovative, life-saving genetic tool, the Sleeping Beauty Transposon System demonstrates the value of basic research. And it continues to advance genomic applications for living beings and a healthy planet.