Tree of Life via Genomics 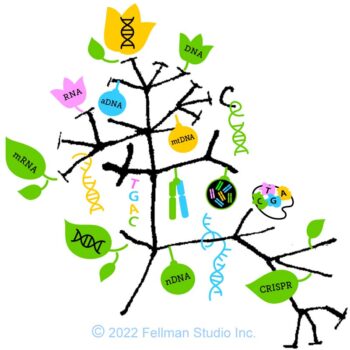 Tree of Life via Genomics

Science is doing a lot for us, like tracking mutations in the evil coronavirus, making vaccines with mRNA, and something beautiful not making headlines — an updated version of the Tree of Life also made possible via genomics.

How naturalists and evolutionary biologists built the tree is a long, fascinating story. An excellent place to start is Charles Darwin’s sketch (below) that he dashed off 185 years ago. 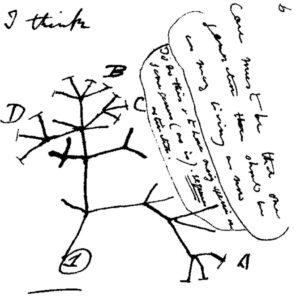 Darwin’s “I think” sketch (above) is from one of his notebooks with his observations made during the historic voyage of the HMS Beagle. My artwork, at the top of this page, has colorful baubles added to Darwin’s famous sketch. Scroll all the way down to learn what the words in the baubles mean.

Charles Darwin and Alfred Russel Wallace were colleagues and respected 19th century English naturalists, geologists, and biologists. They were thinking about evolution and arrived at similar deductions at the same time. Historians and scientists consider Darwin and Wallace as co-authors of the Theory of Evolution. The key points of the theory:

What shook Darwin’s nineteenth-century society? You may say religious views, moral outrage, superstition, and yes, all of that made a ruckus. But what made people go wobbly was the one, lonely line forming the tree’s trunk. Do you see the line? (It’s touching the circle with number one).

The line boldly claims that all species are related via a common ancestor. The most ancient forms are on the bottom, with descendants branching into two domains. The simple sketch implied something remarkable:

Now, in the 21st century, we understand that the ancestral population originated from “a Last Universal Common Ancestor (LUCA), which lived over 3.5 billion years ago when the planet was newly formed.”
— Source: BBC Future article

It was Darwin’s sketch that captured the essence — an evolutionary tree with two domains of life evolved from one common ancestor. The strong, quick marks express what must have been a thrilling “ah-ha” moment for Charles. Alas, the discovery didn’t elicit the same sense of wonder and awe in others. We had to wait 140 years for the next leap and the discovery was wonderous.

The next far-sighted leap

Darwin sketched his tree from the physical characteristics he could see and the evolutionary relationships he imagined. It was a far-sighted leap over conventional thinking without the knowledge of genetics — and the rich resource of data from genomic sequencing.

His approach transformed the field of evolutionary biology and set us on the path to the Genomic Revolution. Take a look at Darwin and Woese’s trees side by side to see what changed.

The images shown above are Tree of Life diagrams made 140 years apart. On the left: Charles Darwin’s 1837 two-domain Tree of Life. On the right: Carl Woese’s 1977 three-domain Tree of Life via genomics. Both show that all species are related; the most ancient forms on the bottom with descendants branching and diversifying. And there’s LUCA! Our ancient and extinct universal common ancestor.

Woese discovered extremophiles, a strange microbial life found in hot springs and deep-sea vents. He used sequencing technology to identify the organisms and found them so unique, he designated them as a third form of life.

Woese named the microbes archaebacteria and classified “Archaea” as the third domain. Genetic sequencing data also allowed him to rebuild relationships within each domain, thus dramatically redrawing the Tree of Life.

You may be wondering, which branch do humans sit on? Look closely for Animalia; it’s one of the kingdoms in the Eucaryote Domain, which includes humans and other animals.

It’s been forty-five years since Woese drew a three-domain Tree of Life via genomics. What does it look like now? Tap on the image below to see the exquisite detail in the full-size graphic of the metagenomic phylogenetic universal tree. 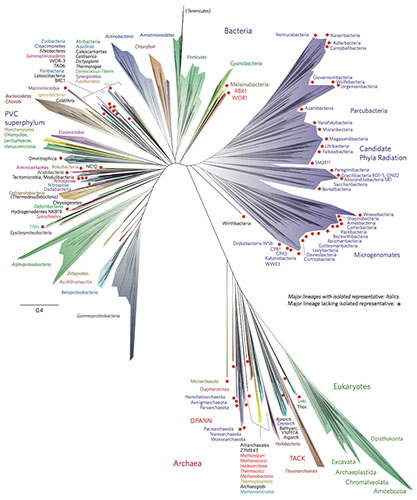 The Universal Tree of Life is a diagram of the three domains of life and the evolutionary relationships of organisms using physical characteristics and genomic data. The image is in the public domain.

In the twenty-first century, we can see the diversity of life and the evolution of species encoded in genomes. Genomic science impacts everyday life; we track coronavirus mutations and use genome engineering tools to make life-saving COVID-19 vaccines to stop the virus. And, upon request, analysis of your genomic data to keep you healthy.

By the way: Wouldn’t it be wonderful to see Darwin’s actual notebooks? They’re in a special collection at Cambridge University Library in England. We can’t see “I Think” on a page in Notebook B, though. The notebook with the iconic sketch and one other notebook went missing twenty years ago.

Who did the dastardly deed? The notebooks are masterpieces that belong to all of us. The disappearance of these treasures is a heartbreaking cultural and scientific loss. Cambridge University Librarian Dr. Jessica Gardner described the notebooks, their historical importance and asks for your help to find the books and the person who stole them.

What do the words on my illustration of the Tree of Life via Genomics mean? (The image at the top of this page).

mtDNA – mitochondrial DNA sits on  the 37 genes in the mitochondria, an organelle in the cytoplasm of your cells