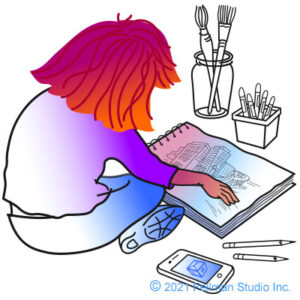 I’m an artist for genomics because science and art together help us interpret, study, and explore the world around us. Art and science complement each other; the experience of the sublime in a work of art, the beauty in Nature. Both can evoke awe and wonder.

Drawing and writing about wonderment is my way of catching your eye to spark curiosity and a desire to know more. I want to nudge you to understand the science of your beautiful genome. Experience the wonder of your inner biology. It’s what Angela Wistrcill and I talk about on her “Awake to Wonder” podcast.

I’m a citizen for genomics because anti-intellectual attitudes and assaults on science are undermining our society. The disturbing behavior of climate deniers, anti-vaxxers, and conspiracy-makers make it more urgent than ever to support science and reason.

We must make our pro-science voices heard. As the first generation to have our whole-genome data, we have responsibilities. As informed Genome Explorers, we can demand fair and ethical policies.

We have the power to insist on ownership and safety of our data. Call for continued support for scientific research and call out the naysayers taking us into the dark ages. Let me illuminate the significance of our moment and imperative to act:

It’s why I’m an artist for genomics. Having your Genome Story is a proper hero’s adventure and one that mesmerizes philosophers, poets, musicians, and visual artists like me. Pictures and a story can capture the wonder, but I want to do more than captivate; I want you to become a genome-smart advocate-for-science.

The Genomic Revolution will change us; it changed me. I morphed into a genome explorer and fierce advocate for science. I’ve been exploring the science of our magnificent genomes with art and story ever since.

I’m grateful for the many opportunities to work with amazing people at the universities, foundations, and institutes that have supported my work. You can find examples of the projects mentioned below on my other website,  FellmanStudio.com.

Geneticist Perry Hackett is my mentor, checking my work and guiding me to experts and resources. Anthropologist Irma McClaurin championed the University of Minnesota commission for my DNA Portrait Exhibit.

As a Fulbright Senior Scholar to Israel, I worked with Dr. Dan Mishmar, an evolutionary geneticist at the Ben-Gurion University of the Negev, to develop an animated video about his research.

Another opportunity came from the National Evolutionary Synthesis Center (NESCent). It was a National Science Foundation think tank for innovative, cross-disciplinary, evolutionary research at Duke University. I was granted a six-month residency to develop interactive media about genomics and human evolution.

During my residency at NESCent, I was with a working group led by Dr. Nina Jablonski and Dr. Henry Louis Gates Jr. We developed curricula for middle school students connecting their genetic ancestry with a family history that received funding from the National Science Foundation (NSF) and Robert Wood Johnson Foundation (RWJF).

The grants led to several successful, ongoing programs: the “Genetics and Genealogy” curricula for undergraduates at Spelman College and “Finding Your Roots” summer camp for teens at Penn State University.

I designed interactive media for the programs; a digital book for Spelman, and a visualization tool for Penn State. You can watch a short video introducing each program on my Vimeo site here and here.

“Skin We Are In,” a book about the evolution of human skin color, is another collaboration with Nina Jablonski. It celebrates the “glorious human rainbow” as an illustrated story with the science written by Nina and artwork by me. Available from Amazon.

Proud to be one of the founding members of the Genome Writers Guild (GWG) — a scientific organization building a better future for humanity through genome engineering and public outreach.

I’m a member of the National Association of Science Writers (NASW), the Philosophical Society of Washington, D.C. (PSW), and the American Society of Human Genetics (ASHG).

The image at the top is an illustration from the last chapter in the digital book “We Want Our Genome Story.”